Did you know that in 1964 the Tolleson Park location was under consideration for the site of Cobb Hospital? The current Austell Road site won out, and the land remained vacant for another ten years.

The surrounding neighborhoods were constructed mostly in the 1950s and 1960s, so this vacant area was surrounded by residences for years before it became a park.

In 1974, bids for the first phase of the new park’s construction were requested, and the facility, called King Springs Park, officially opened on December 20, 1974. Then Lt. Governor, Zell Miller, attended the ribbon cutting ceremony. At that time, the park included playing fields and may have included a building as well. 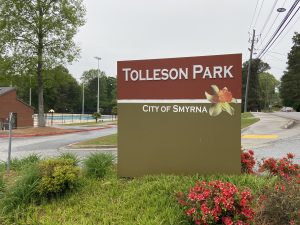 In 1976 the City of Smyrna received a grant that assisted in construction of the second phase of King Springs Park. This included a pool, tennis courts, and a parking lot. A third phase of development for the park would have added a lake, but this was never built.

The King Springs park was renamed the James E. Tolleson Park in October 1988 in honor of James (Jim) Tolleson. He was a 9-year member of the Smyrna City Council and served as the chair of the Parks and Recreation committee. He also served for several years as a Georgia State Senator for the 32nd District before his death in 1988. Jim Tolleson was instrumental in the development of the park as well as the inclusion of the popular Olympic-sized swimming pool.